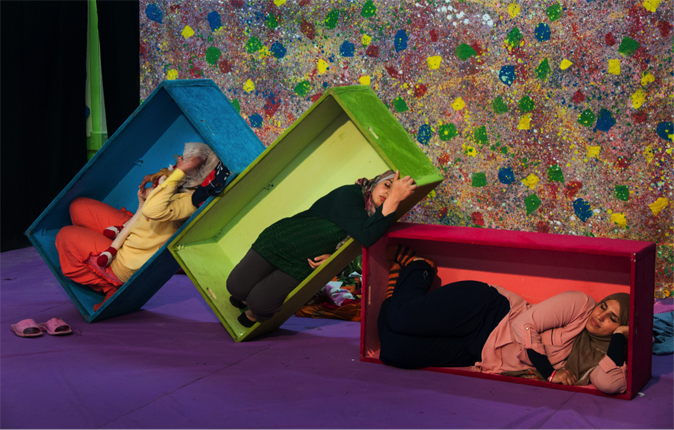 In the upside down bedroom of three sisters, Adan , the oldest at 15, tries to keep the sisterly peace as the girls straighten their room. The provocative 12 year-old is Sida is the middle sister whose goal is to taunt, tease, and annoy those who give her reason. Then there is Hind, a smart, determined, loud, opinionated 5 year old girl who knows all. When Hind learns that the family has received permits to go to a wedding in Jerusalem, she refuses the idea. In her mind, the snow in Jerusalem has killed everyone and there is nothing there anymore. Her interest grows as she hears stories of 4 brides and 4 grooms, new clothing, and large white cakes. Reluctantly, Hind agrees to participate in the trip only to face the reality of borders, permits, the siege, and giant wall that surrounds her birthplace.

The play was made by 4 groups of women actresses performing simultaneously in different locations.