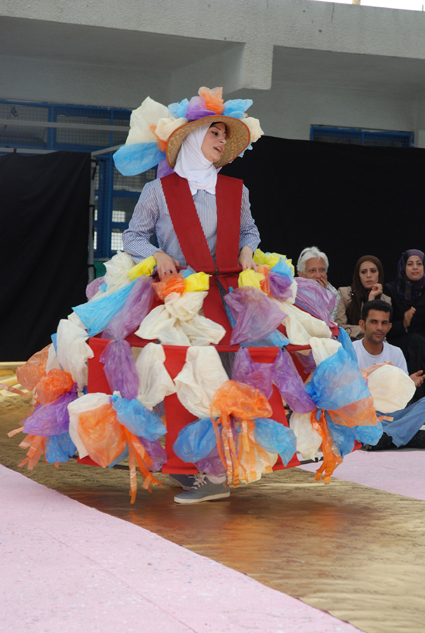 For these Summer Games of 2011, Jackie Lubeck has written a collection of four plays with the cover title “Entanglement.” The plays were written in the spirit of Gaza during the year where much of the population was concerned, also confused, about the future, of their work, their movement, and about the overall political situation. This was the starting point.

As a result, the four plays that were written looked at different groups within the population and how they got through a given day. In “The Grandfathers” we meet the oldest of our population, those men between 90-105 who still have something to say and who know the country from top to bottom. In “The Mothers” we find a group of all ages of women, from the pregnant new wife to the older woman whose 12 children have left the country. In “The Brothers” we hear from the male teenagers who are ready to fight anything, including each other, these boys who are the warriors at this age, regardless of the subject. And then in “The Sisters” we watch the youngest and most vulnerable ot the population and that is the little girls. The relations between these 16 people are the secret of the writer and provide a game for the many kids who saw more than one play and who tried to match up the families.

In “The Sisters” four little girls discover that they have their own thoughts. Let’s meet Juju, a wild angry girl, fighting with the rules of right and wrong, fighting with everyone but that’s just her character. Then meet Olala, a sweet and beautiful girl, the favorite grandchild of her grandfather (she is always quoting him), and with a very “proper” opinion regarding adults and what is right and wrong. Then there is Dalia, the youngest of the four, a girl who is afraid of the outside world and everything that is different from what she knows or what she is told. The fourth girl is Hiba who is loud but clever and very curious about the world. The four young girls play together every day after school.

On this day, Hiba reveals her secret dream of wanting to become a magician and to travel the world. She wants her friends to join her dream but soon it becomes clear that the other girls all have dreams of their own; and opinions of each other’s dreams.

OLALA (to Hiba): I am not telling my grandfather about this secret because he won’t let me play with you and he’ll tell me to find a new friend, but I like you.

Juju, in her rage, decides that the magic world is the best one for her. And with her power, finally the magic begins. From every side beautiful colors appear, balloons float, and the sweet voices of young children singing fill the air.