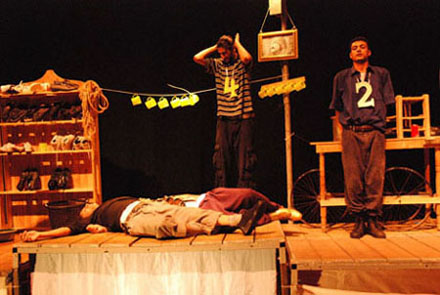 I wrote the play during the on-going siege of Gaza. It’s an odd little piece about survival and the absurdity of the situation in Gaza. And it really is absurd these days. The world should be ashamed! If not for the very dangerous tunnels that have grown like mushrooms next to the border with Egypt, there is very little to be had in Gaza. People, now unaware of any other type of existence, have gotten used to looking for – or living without – the most ordinary of daily needs. In the play, a group of young people try to get what they need. The opening line: All a person can do is try. But the play is not about stuff. It is about the need for a solution, the need for an open border, for trade, for jobs, and for an end to a ridiculous situation.

For the planned tour in the Netherlands and Belgium, we tried desperately to get the 7 actors out of Gaza. Not sure it would work, we made a Plan B…  the same play re-made with a team of West Bank actors, friends, colleagues, professionals from our old and new circles.  The play is a comic tragedy… organizing the tour was a comic tragedy. Plan B went to Europe. Plan A, disappointed but not distracted toured throughout the Gaza Strip.  See Highlights. Also see “The Game Plan B”

Friend 1: It’s a booklet for the audience.

Friend 4: Quiet. Write. Say that we made them a comedy.

Friend 4: Of course it’s a comedy.

Friend 1: It’s not a comedy. The world is falling to pieces.

Person 5: That’s what I keep saying.

Friend 3: Write. It’s a comedy about a tragedy.

Friend 3: You under-estimating kids again. You have to stop that. They know more than you.

Friend 4: Tell them after the play we are going to make scenes with them and see what they think?

Friend 1: The play, the play we are making for them. What’s wrong with you?

Person 5: You see, the world is falling to pieces.

With performances planned in Europe, we wanted a universal theme, something people in other countries would understand, something we – as Palestinians – could share – with other cultures.

Transformation of text from English into Arabic – Hussam Madhoun

Sets & Costumes – All of Us