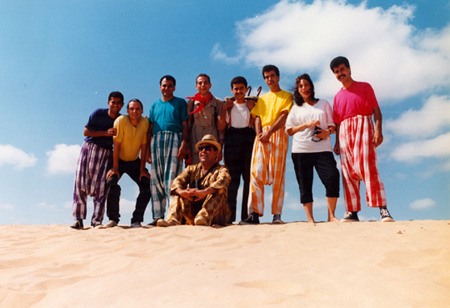 Merchants are racing through the desert. The winner can drill for oil at the other end. In the middle of the desert, one paranoid merchant fires his guide and then shoots his porter. The judges are called upon to keep the world order in order. The actors tell the audience: You have seen and you have heard. What is not strange, find strange! What is usual, find inexplicable, what is the rule, see it as abuse, and when you recognize abuse, do something about it.
First rehearsals took place in ridiculous, small spaces from hallways to unused classrooms. Finally, we found some relief in the multi-purpose (and always in demand) hall at the YMCA.  Finally, we had a closed door and the privacy needed for concentration. The actors, young men who came from different theatre backgrounds and experiences, consolidated into one serious and committed group with one common aim.

Made in Gaza
The production was made in Gaza The motto: if it isn’t in Gaza, we don’t need it. A few craftsmen, shop-keepers, businessmen, became involved and concerned over the work and their participation in it. A shop-keeper who works in Souk El Fras and usually sews plastic for building sites was busy figuring out the best way to sew a plastic river, or to make the black plastic costumes for the characters playing The Night. A chair-maker had to figure out the best way to make a pair of chairs two meters high. The bamboo carpenter, the dye seller, the hammer & nail shop, the shawarma chef, the shirwal tailor, the water man, we did business with a whole range of people who respected and accepted the peculiar dynamics of our theatre work. Many Gaza merchants came in contact with the new production and the new phenomenon.

The First Audiences
The new Ministry of Education and the Ministry of Culture joined in and the first performance of Theatre Day Productions opened in Gaza September 28, 1995 before a select audience in our rehearsal room at the YMCA.  From there we moved to the Jabaliya Youth Center to start working with high-school kids, testing our target audience. 12-17 year olds or 10-17?  This is when we decided that TDP’s audience would be no more than 200 kids at a time. With everyone able to hear and see, the age group was 10-17.

The First Drama Workshops
Following the show, the first drama workshops proved the biggest surprise of all. The young adults had no problems acting out a scene, changing the ending, imagining a new scene based on their experience with injustice. The most touching moment of the day was when a young man made an official request for an immediate audition. He was brought behind our curtain where he sang us a song and then asked to sign up.

The First Money
We were able to purchase some second-hand sound equipment and it was so second hand that the second day we brought in a Gazan sound doctor to remake the speakers. A stroke of good luck was finding post-production funding for the actors and a 15-show school tour. This gave us a big push towards one of the aims of Theatre Day Productions: to create a group working independently and as professionals in theatre & education.
Fifty performances and workshops were given of “The Exception and the Rule”

Based on the play by Bertolt Brecht 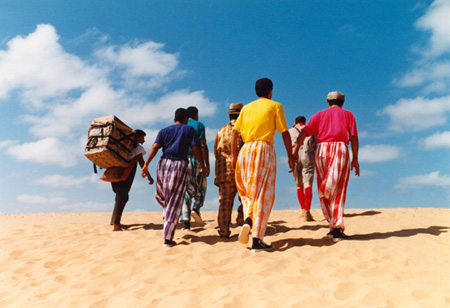