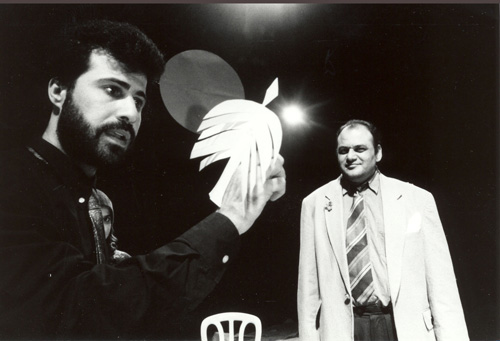 “The Conference of the Birds” (Manteq at-Tair) is the best-known work of Farid Eddin Attar, a Persian poet who was born at some time during the twelfth century. The birds of the world gather together to seek a king. They are told by the hoopoe bird that they have a king – the Simorgh – but that he lives far away and the journey to him is hazardous. The birds are at first enthusiastic to begin their search, but when they realize how difficult the journey will be they start to make excuses. The hoopoe counters each of their excuses with anecdotes that show how their desires and fears are mistaken. The group flies a little way, formally adopts the hoopoe as its leader, and then decides to ask a series of questions about the way before proceeding. These questions are also answered by anecdotes. The last question is about the length of the journey and in answer the hoopoe describes the seven valleys of the way. The birds arrive at the court of the Simorgh. At first they are turned back; but they are finally admitted and find that the Simorgh they have sought is none other than themselves.

“On this land of prophets and the quest of Truth, we have found a magnificent feather belonging to a legendary bird, king of all birds, and we have become birds to try to find him. Like the reed-flute who cries because it has been separated from its reed-bed and longs to return, we have followed the feather.”

Based on the poem of Farid Eddin Attar

Francois Abu Salem is the artistic director of El Hakawati Theatre Company. (Please do not confuse this with the Palestinian National Theatre which is often and incorrectly referred to as El Hakawati.) President Yasser Arafat (RIP) recognized Abu Salem’s work in 1997 when he honored Francois with the first Palestine Prize for theatre.

Hassan Ben Gharbia is a choreographer and musician from Tunisia now living in Paris. He is a regular teacher of TDP and trains actors, drama-teachers, and youth in movement, dance, and attitude. Hassan was trained in classical and modern dance and now concentrates on studying the purity in oriental classical dance and movement.