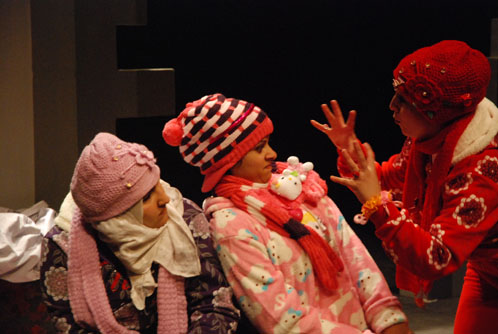 This is the first play written by TDP following the 30 day air attack on the Gaza Strip in the winter of 2008-2009. It took us some time before we were ready to make the play for kids. And when we decided that time was right WE MADE IT 3 TIMES WITH DIFFERENT GROUPS OF ACTRESSES.  Each day the 3 acting teams performed for different schools and each performances was followed by a workshop, as always in TDP.

“a little play” is about 3 sisters whose parents have stopped talking. They are desperately trying to figure out why. What could possibly have happened to silence this home? Maybe thieydid something wrong. Maybe not. What goes on with our parents? This is a question of all kids.